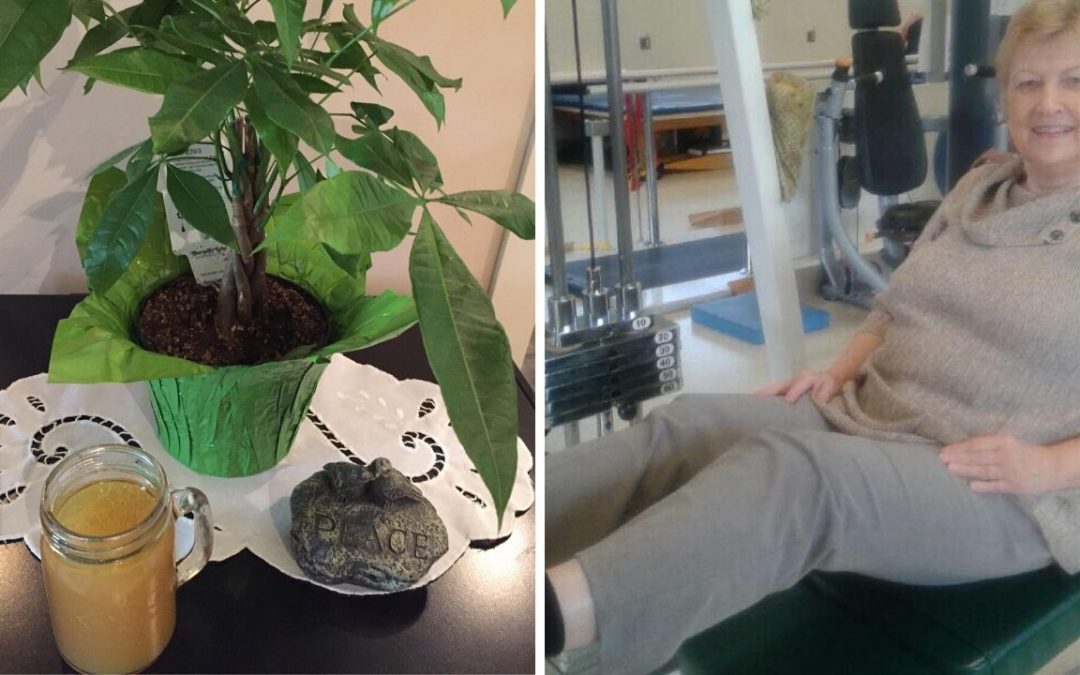 Over 20 years ago, Grandma Maria had her first surgery on her left knee, she had to have cartilage removed due to injury. She thanks God every day that she was able to do everything for about 16 years but then recently, her knee got worse and worse. Let us take you on her journey to her speedy recovery plus consuming BONED Broth in the whole process and the benefits from it.

In the first photo, you will see Grandma Maria’s bad knee a day before her surgery and feeling in pain after the surgery. Read more about Knee Replacement Surgery. 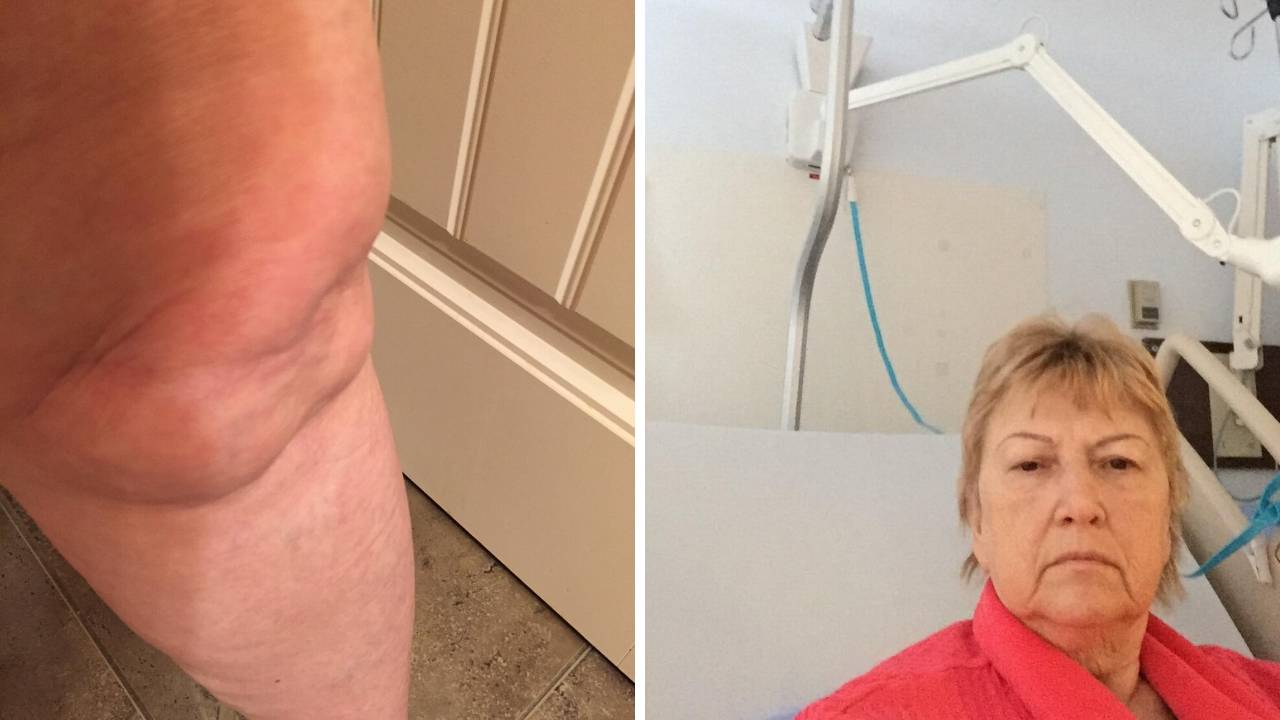 Day 3: Grandma Maria got home from the hospital! Hugs.

Day 5: Grandma Maria went to physiotherapy and had her knee checked – just to add – this surgery is considered very painful. They have tried to give her narcotic pain killers but she had a very bad reaction to it so she only took extra-strength Tylenol and bone broth. 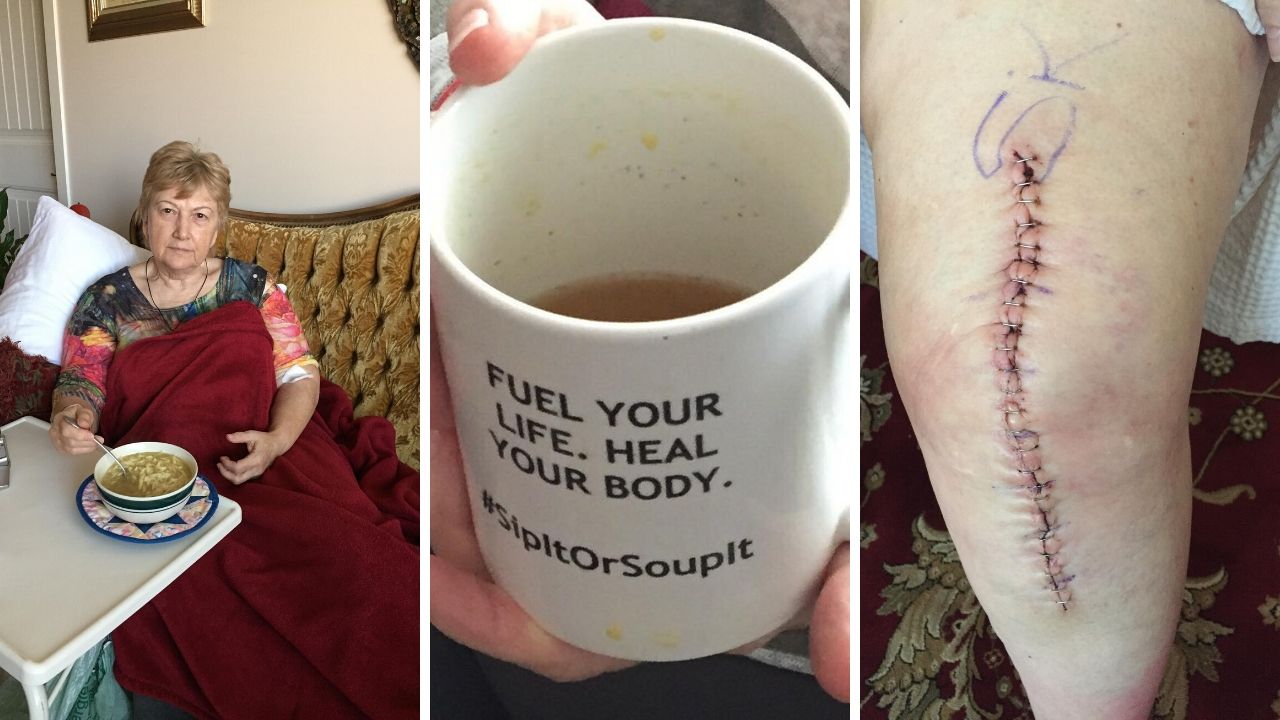 Day 7: Grandma Maria’s thoughts? The meme says it all, LOL! To make her feel better, she whipped up a good hot chicken BONED broth with egg noodles. 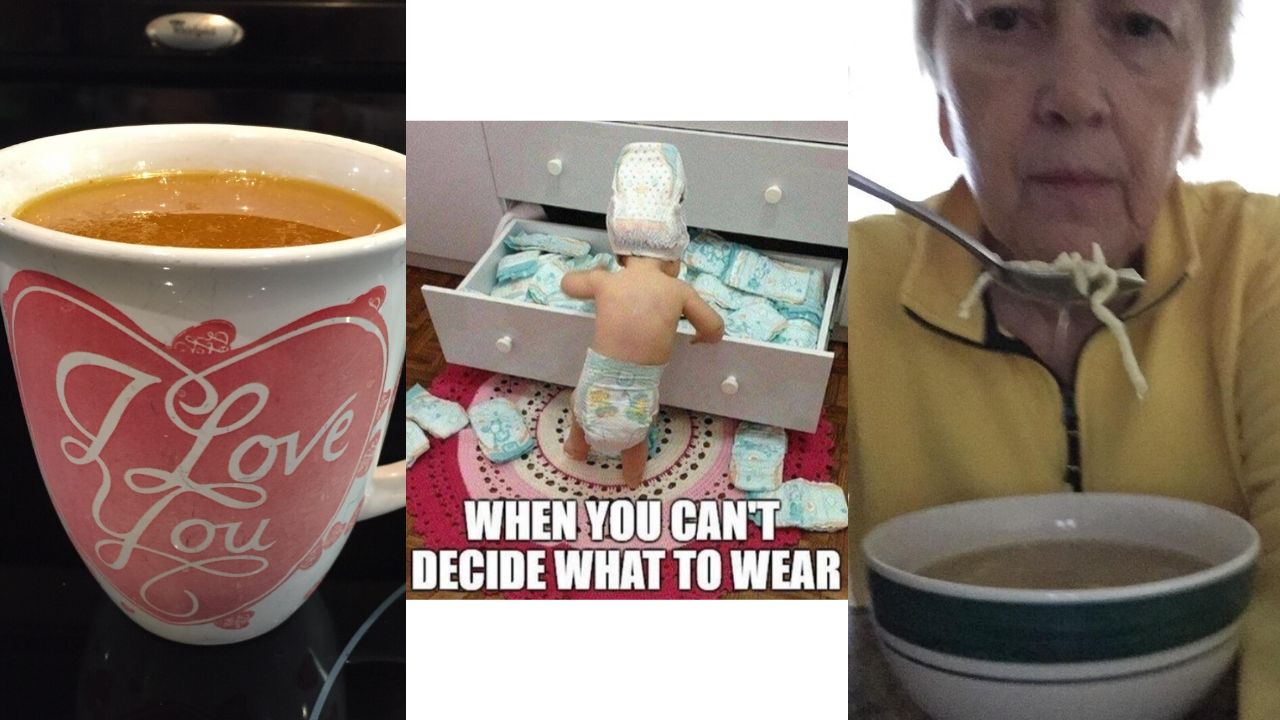 Day 8: Still in pain but feeling so much better. Look at how she walked!

Day 9: Prepared another cup of her daily dose of BONED Broth Beef flavour.

Day 10: Continued her recovery by adding bone broth to her diet.

Day 11: The 25 staples were taken out and she felt so much better without them – walking with a cane only.

Day 12: Cut up a whole pack of Chicken BONED Broth, melted it in a pot to nourish her body. 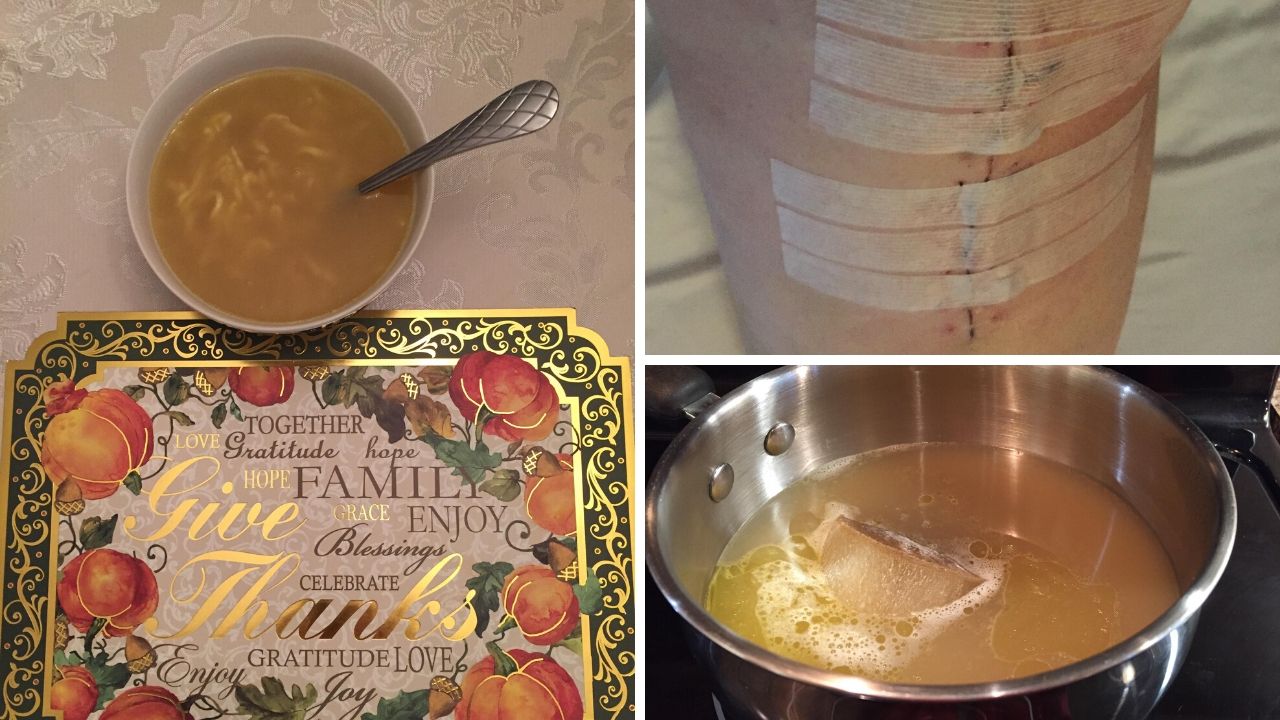 Only 13 days and Grandma Maria used only her cane and she was able to stand on her own. A lot of people fear knee replacement because it’s painful, but see how well she is doing!

Exactly 2 weeks after her knee replacement, she was walking without the walker or cane. If you noticed 2 weeks earlier, her diet was mostly bone broth or soups but now she was cooking a whole recipe with beef BONED broth.

She truly is amazing!

But of course, a hot bowl soup is still a staple during her recovery.

So 21 days in recovery after knee surgery, alternating chicken and beef bone broth in her diet, she felt great. She was capable of walking without any aid and regarding her pain level, she controlled it with aches and pain cream only – no pain killers.

Grandma Maria’s fourth week was difficult due to the healing of the muscles and tightness. She was not sleeping well for 4 weeks and it was exhausting. The good news: she was walking really well and got stronger each day.

Physiotherapy is not much problem for her. The fact is she was told she will be ready to dance for New Year!

She is already able to walk almost perfectly. She believes that the bone broth really helped with her recovery.

She saw someone in physiotherapy after 5 weeks of surgery who still used a walker yet Grandma Maria didn’t use anything after her 4 weeks. She is managing really well today.

One rule that Grandma Maria was dreading for the 6 weeks was, she was not allowed to drive even if she knew she already can.

As soon after her 6 weeks was over, she started driving and bought her ticket for New Years’ Eve Dinner and Dance. She’s ready to dance but let’s see what the specialist thinks.

The biggest challenge throughout this recovery is lacking sleep. It got so bad that finally, she asked the doctor to give me something. So that night she probably got 8 hours of sleep – not full but this is progress. It’s a very common problem after surgery like this.

Grandma Maria went to her knee specialist and the surgeon said she was doing much better than most people after six weeks of surgery and by the way, she continues to drink bone broth. 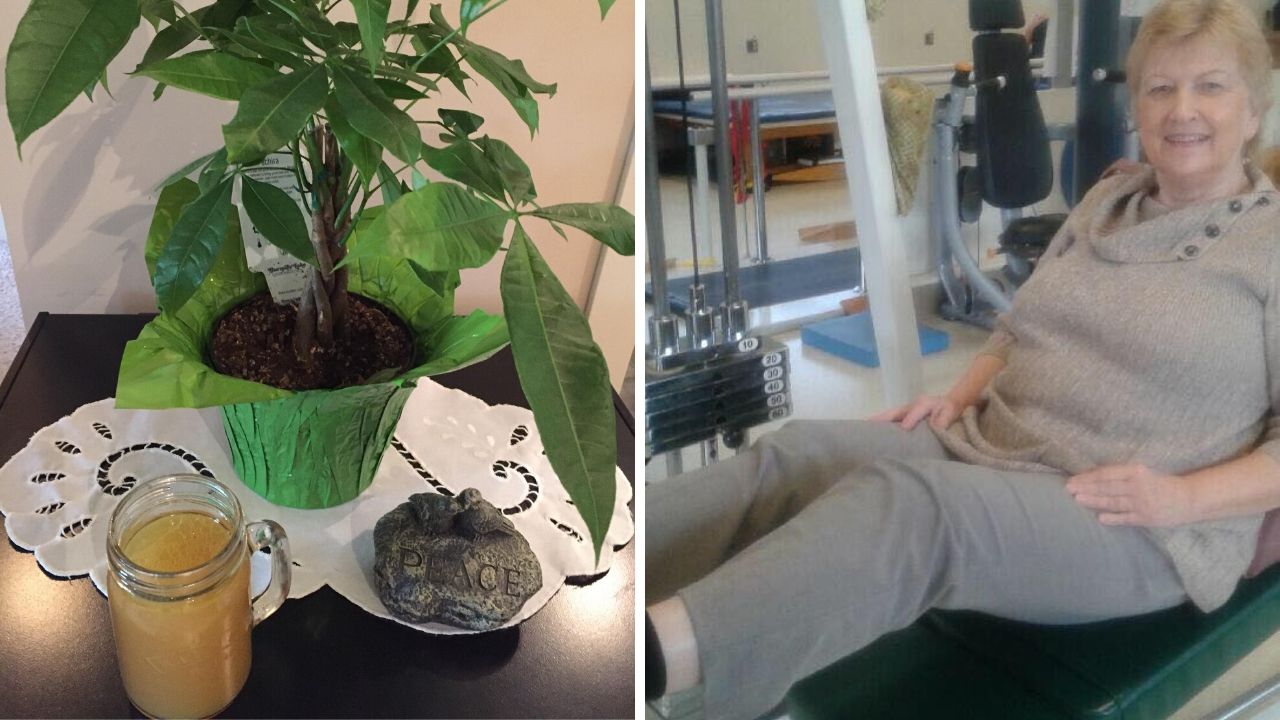 Watch out for PART 2 Soon!